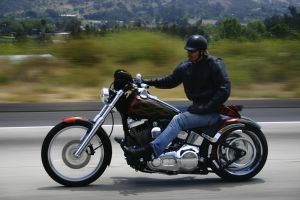 As a plaintiff’s personal injury attorney, I often have the difficult job of representing the family members or next-of-kin in wrongful death cases in which a loved one has been killed in a wreck. That sometimes includes motorcyclists, bicyclists and even riders of ATV’s.
I saw that another Georgia motorcyclist was killed late Thursday when he collided with a vehicle that had pulled into his path.

According to ajc.com, the wreck happened about 10:30 p.m. at the intersection of Ga. 85 and Porter Road in Fayetteville. The young motorcyclist was operating a 2009 Kawasaki motorcycle northbound on Ga. 85 when a 1994 Jeep Wrangler, driven by an 18 year old, making a left turn from Porter Road pulled into his path.

The motorcyclist hit the Jeep and was ejected from the bike, and died at the scene.

So there are really two families grieving tonight, not only the one who lost their family member, but the family of the Jeep driver must also be grieving for the loss of life caused by their family member. Even though the Jeep driver didn’t “mean to” kill or harm anyone, he did kill someone, and must still be held responsible. This is the definition of “negligence.” “Negligence” means the failure to exercise the duty of ordinary (everyday) care. It doesn’t mean you “meant to” cause harm, it means you were careless and your carelessness caused harm to someone else completely innocent. In my experience as an Atlanta trial lawyer, sometimes jurors have a hard time grasping and understanding that concept.

Motorcycles are sometimes hard to see, let’s face it. We car drivers, nonetheless, have a duty to look out for them and see them. Motorcycles are considered “motor vehicles”under Georgia law. The Georgia Driver’s Manual covers sharing the road with motorcycles extensively. Amazingly, research shows
that over two-thirds of the car/motorcycle accidents are the result of a car driver turning in front of the motorcyclist, just like the Fayetteville crash that occurred yesterday. Here’s what the Georgia Driver’s Manual says about why it is difficult to see motorcycles: “Motorcycles present a narrow silhouette and are usually much shorter in length
than automobiles. The small profile of the motorcycle may make it appear farther
away and traveling slower than it actually is. Because it is difficult to judge the
motorcycle’s distance and speed, car drivers need to take a second look, and then
a third. Its small size also makes it more difficult to spot in traffic than another car.”

I know that many car drivers get irritated by motorcyclists who may dart in and out of traffic or maybe go above the speed limit; but, slow down and be calm. You may actually save a life by doing so.