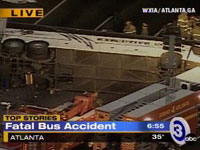 Do you remember the tragic Bluffton, Ohio baseball team bus crash that occurred here in Atlanta on I-75 last year? The Georgia DOT, in typical hard-headed fashion, denied any responsibility for their confusing road signs, which led the professional bus driver to continue to drive on what he believed to be the diamond lane for buses, when, in reality, it was an exit ramp to the LEFT of I-75. By the time the bus driver realized it, he was tumbling off the overpass. There were numerous needless deaths and injuries.

Well, the National Transportation and Safety Board (NTSB) has finally ruled it was the faulty, confusing DOT signs that caused the horrible tragedy. I am sure this comes as a surprise to no one except the Georgia DOT. Immediately after the bus wreck, the Georgia DOT was out on I-75 changing the signs, replacing the old ones and putting more signs up, even while, all the time, the DOT denied any responsibility. Georgia citizens really deserve better accountability from the DOT. Everyone in the State of Georgia (and everyone in the State of Ohio for that matter) knows this wreck was the DOT’s fault, from confusing road signs to having an exit ramp from the left, which is counterintuitive, in the first place. The Georgia DOT has been in disarray lately with Board resignations and even a settlement for sexual harassment. It is high time the DOT gets its act together, before more innocent people die on Georgia roads.