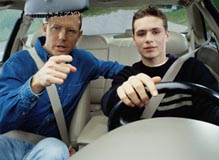 This is a fair-minded debate about whether the driving age in Georgia should be raised. Today, the Insurance Institute for Highway Safety announced its position that the driving age should be raised in all states as a safety measure. It is a known fact that car wrecks are the number one leading cause of death among teenagers. The research shows that if the teen driving age were raised, teen deaths in car wrecks would go down. Simple math.

As a parent of a fourteen year who will be driving in a year and the parent of an 11 year old (who thinks she is 15 already), I say “Amen!” I kid my son and his teenage friends all the time asking them if they have read in the newspaper that the Georgia General Assembly has raised the driving age to 18. At first they fall for it, incredulous looks on their faces, then it dawns on them that I am, once again, “pulling their legs.” It’s a fun pasttime. Of course, my attitude now is a far cry from my attitude I had about the issue when I was a 16 year old growing up in rural Kentucky. I grew up surrounded by livestock and crop farms, where many youngsters drove a pick-up truck on and around these various farms as long as it had “FARM TRUCK” emblazoned on it somewhere. “FARM TRUCK” was the secret code to police officers there was no need to stop the driver for underage driving because he was driving the truck with full immunity because it was a “FARM TRUCK!”
Of course, that was also in a town of 1800 people, not a city like Atlanta of 5 million. Big difference!

As a plaintiff’s personal injury attorney, I have seen for myself and have represented way too many grieving parents who have lost their teenage son or daugther to a reckless car accident that never should have happened. A change in the teen driving age would help avoid this needless suffering for so many families. Georgia, however, is a big state and is largely rural and agricultural and so I doubt whether the Georgia Legislature would ever seriously entertain an increase in the driving age…but don’t you think they should? Let your State Senator and State Representative know how you feel.