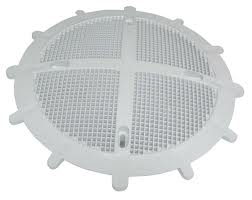 Recently, in Atlanta, Georgia, there has been a lot of media coverage of the near-drowning incident of Usher’s son in a private swimming pool. Apparently, the child’s arm became stuck in a drain at the bottom of the pool and he could not free himself. Audio contractors who were working in the house came to his aid after hearing the screams by his Aunt for help and were able to jump in the pool, pull the child off the drain, administer CPR and save the child’s life. The last report I heard on the child’s recovery is he was doing well, which is wonderful news.

Still of great concern, however, is that pool drain and why the child could not get free from it. There should have been an anti-entrapment drain cover on this pool (photo of a drain cover is above) and an emergency pump cutoff switch, which would have broken the suction power of the drain. The suction power of a swimming pool drain is enormous and can be deadly. There have been numerous cases of children being stuck on a drain in a swimming pool, hot tub or spa and being unable to get off the drain by themselves due to the enormous suction power. In many horrific cases, sometimes the children caught by these drains are eviscerated, i.e., the suction from the drain literally rips their intestines out of them and they are killed or disabled. The Consumer Product Safety Commission has been investigating these incidents since the 1970’s. In 2007, for all age categories, there were 74 reports of circulation entrapments. Individuals in the 5- to 9-year-old category had the highest frequency of entrapment reports. You may never have thought of that possibility until just now. I am writing to make sure you are aware of this deadly potential and, if you are a pool owner, to take action now to install an emergency cutoff switch to the pump that supplies this unbelievable suction power, and if you are merely swimming in someone else’s pool or hot tub, to inquire about the existence of such a emergency cutoff switch and to warn your children to stay away from drains.

There is now in place a Federal Law that requires all public pools and hot tubs to have an anti-entrapment drain cover or other life-saving measures. Passed in 2007, the Virginia Graeme Baker Pool and Spa Safety Act (PSSA), named after the granddaughter of James Baker, III, who died after being caught by a drain in a hot tub. As of December 18, 2008, all public pools and spa were supposed to be in compliance with this act. Although this law applies technically only to public pools, private pools in 2013 really should also be in compliance. Older pools can easily be retrofitted by any pool management or maintenance company. Please check any pool you own or any pool your child swims in for these life-saving devices. Unless you are a personal injury trial lawyer, you may never have even thought of this potentially deadly incident, but the incident involving Usher’s son is a wake-up call to be vigilant so that your loved one is not injured or killed.

Robin Frazer Clark pursues justice for those who have personal injury claims as a result of being injured in motor vehicle wrecks, trucking wrecks, defective products, defective maintenance of roads, medical malpractice and other incidents caused by the negligence of others. Ms. Clark is the Past President of the State Bar of Georgia and the Past President of Georgia Trial Lawyers Association and has practiced law in Georgia for 25 years. Mrs. Clark is listed as one of the Top 50 Women Trial Lawyers in Georgia and is a Georgia Super Lawyer.