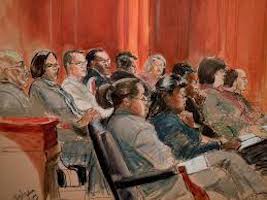 Another juror who declined to give her name but indicated that she voted with the majority said she, too, was ”pretty frustrated because it seemed pretty obvious to me.” The four others, she said, seemed to think it was ”reasonable” for J&J ”to go for profits over people because that’s what all big corporations do.”

But Amy Avila, 42, one of the jurors who sided with the defense, described the split as between ”the thinkers against the feelers,” and said she wasn’t persuaded that Weirick’s cancer stemmed from exposure to contaminated powder.

In 30 years, I have only had one case declared a mistrial, and it may have been one of the most painful things I have ever experienced as a trial lawyer.  It was certainly painful for my clients. In that case, a medical malpractice trial against one of the largest hospitals in Atlanta, the jury deliberated for 3 days. I had no idea which side the jury was favoring, but I objected to the court’s declaring a mistrial. After two weeks of trial and thousands and thousands of dollars lost in expenses bringing the case, ceding to a mistrial is almost the last thing you want to do as a plaintiff’s attorney (although it arguably still beats losing). The trial judge in that case, a very experienced jurist with years and years on the bench, who both sides respected immensely, finally declared a mistrial. And honestly, that trial judge was certainly within his authority to call it at that time. I just hated it. We had to try that case a second time, which is also a horrible experience for everyone involved. My co-counsel in the second trial, Adam Malone, had this apt analogy to retrying a case:  “It’s like working out and really sweating so that your clothes are wringing wet with sweat, then taking a shower and having to put your sweaty workout clothes back on.” Yuck.  Not fun.

So what’s next for these parties?  J&J spokeswoman Kim Montagnino said the  company would seek a retrial. “We look forward to a new trial to present our defense – which rests on decades of independent, scientific testing confirming that J&J Baby Powder and Shower to Shower do not contain asbestos,” Montagnino said. “Johnson & Johnson stands by our talc products, which have been on the market and used safely for more than 130 years.” There is always the possibility of settlement of this particular claim before a second trial occurs. But two other trials involving J&J’s talc products are currently in progress, one Los Angeles County, and the other in J&J’s home state of New Jersey, which seems not to portend well for a settlement in the California mistrial case. Both sides can learn from the mistried case, although it is an expensive lesson.  Conventional wisdom says the person with the burden of proof (here, the plaintiff) stands to do better the second time around because the plaintiff will fix whatever they did wrong the first time, and had already convinced two-thirds of the jury the first time. I’m not sure I agree with that “conventional wisdom.”  There will be 12 completely new jurors and 12 completely new opinions. Conventional wisdom may not apply.