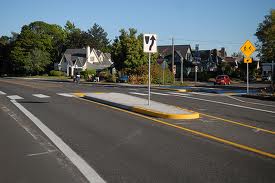 Yesterday was a bad rush hour in Atlanta, with constant rain and poor visibility. Already bad traffic was made worse by the rain. It presented the right conditions for lots of car wrecks. I was heading home a little early but it was still just dusk…still enough light for street lights not to be on, but dark enough to present a real hazard to the Atlanta motoring public, especially with the rain. A driver directly in front of me on East Rock Springs Road in Atlanta, without any warning or explanation, ran right over a traffic calmer that looked similar to the one in the photo above. But this one was not exactly the same, because it didn’t have the proper markings or signage as the one above does. This driver ran right on top of the calmer, flattening three of his tires, knocking various things off his car and causing sparks to fly in the air. He couldn’t have been going faster than 30 m.p.h., because that’s how fast I was going and I was right behind him. That touch up with the “traffic calmer” undoubtedly cost that young man a lot of money in repairs to his car. Not much of a “calmer” to him! Fortunately, he didn’t seem to be injured.

There is a manual that all road engineers and departments of transportation, including the Georgia Department of Transportation, must follow when installing these obstacles in the middle of a perfectly good street. It is the Manual on Uniform Traffic Control Devices, known as the MUTCD, and it mandates that traffic calmers must have sufficient markings and signage to warn drivers of its existence. The fact that this unsuspecting driver yesterday drove right on top of the thing suggests this one was not properly marked. There are many ways to mark a traffice calmer to warn drivers, including reflectorized tape around the curb, or even delineator posts, as shown below. 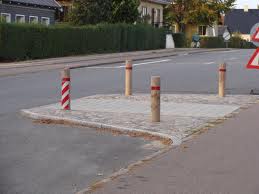 This accident yesterday I saw harmed only the car, but it is not difficult to understand how these “calmers’ can do the exact opposite of what is intended and actually cause harm to a driver. These things are seemingly being installed everywhere these days. New ones have just been installed on 14th Street and Peachtree Street in Midtown between 14th and 15th. I have to try to avoid running over them every day. One particularly hazardous “calmer” is found on Peachtree Street in Buckhead near its intersection with Piedmont Road. It proved deadly when it lacked any lighting, lacked any reflectorized tape or paint, lacked any delineator posts and had no signage. Drivers at that time didn’t stand a chance against it.

Promoters of beautification of our Atlanta streets may argue these traffic calmers improve safety…but I am not convinced. Having an obstacle course in the middle of a street for Atlanta drivers to have to avoid doesn’t seem like a good idea to me.