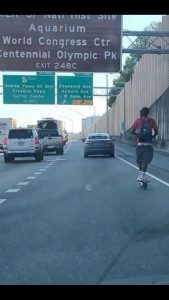 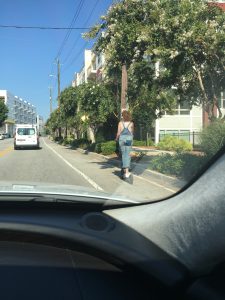 Transportation is constantly changing. The year 2002 brought us Segway Personal Transporters; 2009 gave us Uber (formerly “Ubercab”); 2010 brought bike-share companies to the U.S.; and 2017? Scooters. Yes, the same toys we used to ride around our neighborhoods as kids have now become electrified and are the newest, hippest mode of transportation in at least 21 states of the U.S. These electric scooter companies — namely Bird, Lime, and Spin — are taking cities by storm in recent months. People from the company drop off dozens of scooters at “nests” located around the city each morning for civilians to pick up. The person can pay through the app the $1 starting fee, ride it around — paying additionally by time or mileage — and then just drop the scooter off wherever he or she would like. At the end of the night, the company collects the scooters around the city to check for maintenance and repair needs and then deposits them around the city streets the next morning. At first blush, this idea seems great! Avoid traffic, get to a close distance quickly, and for cheap! Upon closer observation, however,  just as the scooters seem to be taking over, more and more problems are quickly emerging with the newest toy-turned-transportation.

First, safety. There have been numerous accidents reported in the last few months as the scooters have become more readily available to the public. The websites and apps for these scooters suggest the riders should wear a helmet; however, there is no method of enforcement from the businesses, and when a person picks up a Bird to ride around town, a helmet does not come attached to the scooter for a rider to wear, and people walking around downtown are likely not already carrying a helmet with them when they get the urge to pick up a scooter. Bird only provides a helmet when a rider puts in a request for one. Personal injury attorneys across the country are reporting dozens of people seeking representation after getting injured on these scooters, and liability and insurance surrounding this latest mode of transportation is a relatively uncharted territory for these attorneys to try to manage. Liability can be hard to prove, and questions of insurance coverage for injuries can be tricky to answer; health insurance will say that car insurance should cover medical expenses, and car insurance points the finger back saying it won’t cover a crash on a two-wheeled vehicle. Oddly enough, according to one personal injury attorney, it’s possible that homeowners or renters insurance could cover a rider in these situations. Another attorney says that though Bird says that riders use the scooter at their own risk and limit its own liability to $100, the company’s waiver likely will not stop claims of gross negligence.

As if the safety concerns were not enough to label these scooters an official nuisance, the legal concerns may do it. According to the Official Code of Georgia, the operation of motor scooters is only mentioned once under the definition of “motor driven cycle” which also includes motorcycles, bicycles with motors attached, and mopeds. Clearly, these newly innovated technological devices (electric scooters) have yet to be addressed by many state legal codes. Because of the lack of specificity in the Code regarding the definition of electric scooters, cities around the country are interpreting law one way, and the scooter companies are interpreting it the other way. The companies do not want riders using the scooters on sidewalks, and the Cities don’t want the riders using them on streets. Additionally, confusion over whether the scooters need license and registration has been at the center of much debate over the legality of the scooters. One of the main legal concerns and problems the cities and public are having with the electric scooters is the sidewalk litter they cause. Because a rider is able to pick up, ride, and drop off the scooter wherever he or she pleases, the “dockless” nature of these scooters is causing sidewalks to fill up with scooters  disposed of by inconsiderate riders, blocking pedestrians’ and wheelchairs’ paths. Though many of the legal concerns are up for debate right now, the issue surrounding the blocking of the sidewalk is not one to be misinterpreted; O.C.G.A. § 16-11-43 says it is illegal to recklessly obstruct any  “sidewalk, or other public passage in such a way as to render it impassable without unreasonable inconvenience or hazard” and failure to remove the obstruction — namely, the electric scooter left lying in the middle of the sidewalk — after an official request to do so is a misdemeanor offense.

Finally, the companies seemingly just dropped these scooters in the cities one day without permission. No registration, no permit, and no warning. Some cities aren’t having it; city officials in Santa Monica, CA filed a criminal complaint back in December for Bird’s operating without city approval and ignoring citations asking the company to obtain proper licenses and remove the scooters from sidewalks.  More recently, the officials and Bird decided to settle with the company paying $300,000 after failing to comply with the city’s business licensing requirements. Electric scooter companies have been served cease-and-desist letters in multiple cities around the country, and so far, Lime seems to be willing to comply by taking its scooters off of the streets, but Bird is holding out. Cities are issuing these letters and want the scooters off of the streets (and sidewalks) just until the city commissions have enough time to meet to determine the best ways to regulate this newest transportation trend.

For now, Bird is fully operational in Atlanta with no signs of slowing down. Perhaps City of Atlanta officials will meet in the coming months to discuss regulatory options for the electric scooter companies as have city commissions in other places around the country. With the rise in popularity of electric scooters, we are seeing a rise in accidents, injuries, and potential lawsuits. My advice to you would be to steer clear from the electric scooters, but if you can’t resist your temptations to hop on, please wear a helmet and follow the same traffic laws you would otherwise.

Stay safe out there.

Robin Frazer Clark pursues justice for those who have personal injury claims as a result of being injured in motor vehicle wrecks, trucking wrecks, defective products, defective maintenance of roads, premises safety, medical malpractice and other incidents caused by the negligence of others.  Ms. Clark is the 50th President of the State Bar of Georgia and a Past President of Georgia Trial Lawyers Association and has practiced law in Georgia for 30 years. Mrs. Clark is a Barrister in the International Society of Barristers. Mrs. Clark is listed as one of the Top 50 Women Trial Lawyers in Georgia and is a Georgia Super Lawyer.  Robin Frazer Clark~Dedicated to the Constitution’s Promise of Justice for All.