Taking a stroll down the streets of Atlanta can be a healthy pastime or a means of getting in your social interactions for the week, but the cheapest form of transportation is quickly becoming one of the more dangerous. One unfortunate story in Smyrna, GA last week tells of a pedestrian fatality at the hands of a distracted driver; the driver made a phone call, drove off of the roadway, and struck the pedestrian. Another upsetting story in the AJC last week reported of a woman killed in Atlanta as she attempted to cross I-75 and was struck by multiple cars. Recent reports suggest that she attempted to run across the highway due to a dispute over drugs that resulted in someone chasing her. Unfortunately, this story is just one of many that could be written in Georgia this year, as pedestrian fatalities are on the rise on the national level. From 2007 to 2016, the number of pedestrian fatalities increased by 27%, and whether the victim is a harmless pedestrian walking to work or drugs are at play, researchers are not quite certain what is the main cause for the increasing numbers of pedestrian fatalities in the recent years.

Reports over the last few years have found a few potential factors to the increasing fatalities. Obviously, cell phone usage is an issue. Whether a distracted driver is using a phone while operating a vehicle or a distracted pedestrian has his or her face buried in the phone while walking through a crosswalk, cell phones are making us more distracted, less aware of our surroundings, and slower to react when we encounter danger. Cell phone use increased by 236% in the years 2010 to 2016, providing greater opportunity for cell phone related pedestrian accidents.

Many studies and reports suggest the increase in cell phone usage could be a leading cause of pedestrian involved accidents, but a new study provides an interesting possible factor in the rising number of pedestrian fatalities: marijuana. The report does not intend to imply direct correlation of any sort but merely suggests that the possible impairment of judgment and reaction time — for both drivers and pedestrians — due to recreational use of marijuana could lead to higher pedestrian incidents on the roadway. The study found that in DC and the 7 states that legalized recreational use of marijuana between 2012 and 2016, there was a collective 16.4% INCREASE in pedestrian fatalities between the first 6 months of 2016 and the first 6 months of 2017. Conversely, in the remaining states, there was a collective 5.8% DECREASE in pedestrian fatalities between those two time spans. 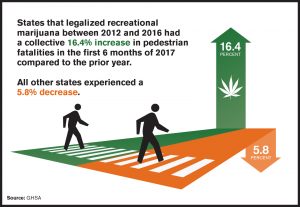 No matter the cause or location, pedestrian danger is an issue that needs to be noticed. There were nearly 6,000 pedestrian deaths in the year 2017, which is only half of a percent less than the numbers from 2016. The 2016 and 2017 total pedestrian fatalities are the highest level of fatalities the US has seen in 25 years. Another interesting statistic to note is that out of all of the country’s traffic-related fatalities, the percentage of those which were pedestrian fatalities is also on the rise, as previously mentioned, during this 10 year period from 2007 to 2016, whereas all other traffic fatalities decreased by 14%. 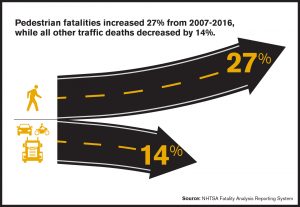 Though this may sound like a problem without a solution,  some research has presented possible ways to limit the number of pedestrian-involved accidents. These suggestions include a variety of strategies to increase the separation between the pedestrian and the vehicles, strategies to make pedestrians more visible to drivers, engineering measures to reduce speeds of drivers, and an increased public education and awareness about the dangers and risks for pedestrians and drivers alike. Georgia is not left out in the attempts to make our streets safer. According to the Governor’s Highway Safety Association, “Georgia is developing a Pedestrian Safety Action Plan with target corridors for assessment and countermeasures, conducting Road Safety Audits, and conducting School Road Safety Audits.”

These action plans and attempts to improve the safety of the roads may go somewhat unnoticed, but they are already having positive effects on the statistics from our state. In comparing the first 6 months of 2016 to the first 6 months of 2017, Georgia actually saw a 17.9% decrease in pedestrian fatalities, with 20 fewer fatalities in the first half of 2017 than we had in the first half of 2016. Georgia was one of the twenty states that had decreased fatality between these two time frames.

After Georgia Highway Safety Association released their Pedestrian Safety Report, Director of the Office of Highway Safety Harris Blackwood shared his comments on the findings:

Robin Frazer Clark pursues justice for those who have personal injury claims as a result of being injured in motor vehicle wrecks, trucking wrecks, defective products, defective maintenance of roads, premises safety, medical malpractice and other incidents caused by the negligence of others.  Ms. Clark is the 50th President of the State Bar of Georgia and a Past President of Georgia Trial Lawyers Association and has practiced law in Georgia for 29 years.  Ms. Clark is listed as one of the Top 50 Women Trial Lawyers in Georgia and is a Georgia Super Lawyer.  Robin Frazer Clark~Dedicated to the Constitution’s Promise of Justice for All.