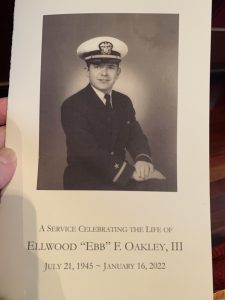 This past Sunday, after attending our regular Worship Service at Glenn Memorial United Methodist Church on the beautiful Emory University Campus, my husband and I journeyed to Buckhead to Peachtree Road United Methodist Church to send off our good, dear friend, Ellwood “Ebb” Oakley. Ebb was in the Navy during the Viet Nam War and, among other awards, had been awarded the Bronze Star and the National Defense Service Medal. His funeral was a military funeral, with the playing of “Taps,” “America the Beautiful,” and “Eternal Father,” the Navy Hymn. Our good friend, Timothy Miller, who sings “God Bless America” before Braves games on Sundays, led us all in “God Bless America” at Ebb’s funeral. To say this funeral was moving would be an complete understatement. It was a send-off appropriate for a great man like Ebb.
Ebb was a Georgia lawyer. Those who know me and follow me know I love Georgia lawyers, but Ebb was a special Georgia Lawyer. He was blessed with a searing intelligence, natural leadership skills, a powerful gift of expression, passion for excellence and thoughtful analysis of public policy.  He had been an aide to former Georgia Senator Sam Nunn and observed the proceedings of the Senate Watergate Committee.  He was lured from the practice of law by the Dean of the J. Mack Robinson School of Business at Georgia State University and developed a Business Ethics curriculum there. He served as a Tenured Professor in the Robinson College Department of Risk Management and Insurance, a Professor in the Robinson College Executive MBA program, a collaborator with the School of Law and participated in programs hosted by the Center for Law, Health and Society at the Georgia State College of Law. His publication of articles about ethical decision-making and engaging performances as a sought-after corporate trainer enriched the Atlanta Business Community.  He was the 1999 recipient of the Board of Regents Teaching Excellence Award. He helped engineer the enactment of Georgia’s Peach Care for Kids, which today provides healthcare for over one million of Georgia’s children. He served as Chairperson of Georgia’s Certificate of Need Appeal Panel.  Unfailingly, Ebb dedicated himself to discourse regarding the marginalized in our midst. Ebb engaged in activism in support of the expansion of support services to benefit the developmentally disabled community in Georgia. He was an enthusiastic supporter of the Special Olympic Games and became a thoughtful adviser to many of those Georgia entities which provide support services for this community.  He was blessed with a searing intelligence, natural leadership skills, a powerful gift of expression, passion for excellence and thoughtful analysis of public policy.
But if you didn’t know all that about Ebb, you would still be impressed by his affable personality, wonderful sense of humor and mischievous smile. Ebb was approachable and eminently amiable. He was admired for his ability to understand an adversary’s position and his craftsmanship of an agreement which allowed both his client and adversary to embrace an agreeable position.  He always sought common ground. His legal career was distinguished in many ways, but most memorably by his unerring acknowledgement of the humanity and dignity of each person with whom he had dealings. I only knew Ebb for 20 years or so, but he treated me as if we were lifetime friends who had grown up together. And that’s how Ebb treated everyone.
Georgia Lawyers could take a lesson from Ebb:  Be more like Ebb. Conduct yourself under The Golden Rule. Treat everyone you interact with with dignity and respect.  Be impeccable with your word.  Always do your best. This is how a lawyer should behave.  Ebb Oakley’s magnificent life is a lesson for us all.
We mourn the loss of our friend and are thankful for the time we had together.

Robin Frazer Clark is a trial lawyer who pursues justice for those who have personal injury claims as a result of being injured in motor vehicle wrecks, trucking wrecks, defective products, defective maintenance of roads, premises safety, medical malpractice and other incidents caused by the negligence of others.  Ms. Clark is the 50th President of the State Bar of Georgia, a Past President of Georgia Trial Lawyers Association, a Past President of the Lawyers Club of Atlanta and has practiced law in Georgia for 30 years. She is a member of the International Society of Barristers and of the American Board of Trial Advocates. Mrs. Clark is listed as one of the Top 50 Women Trial Lawyers in Georgia and is a Georgia Super Lawyer. Ms. Clark is the co-host of the podcast “See You In Court.”