Georgia citizens are being placed at risk by the Georgia Department of Transportation. Two Georgia DOT bridge inspectors have now admitted they lied when they certified 54 Georgia bridges as being safe. David Simmons, who worked in a team with Gerald Kelsey, admitted to filing reports for 54 bridges they hadn’t actually inspected, according to DOT. Steve Henry, director of operations at DOT, misses the point when he says “If we ever thought a bridge was unsafe we’d shut it down,” because without the actual inspections having been done, the purpose of which is to determine whether a bridge is safe for the traveling public, there is no way to know whether they are safe. 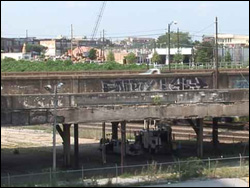 Although these two Georgia DOT rogue employees were forced to resign (shouldn’t they have been fired?), who knows what else is going on at the Georgia DOT and who knows whether Georgia citizens are really safe traveling on the roads and bridges in Georgia? We can only hope and pray that the good people of Georgia don’t learn of any more shoddy work by the GDOT the hard way, the way Minnesota citizens found out this past summer when a major Minneapolis bridge collapsed, killing several citizens. Georgia citizens deserve better.