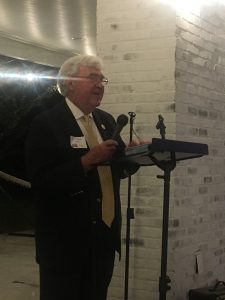 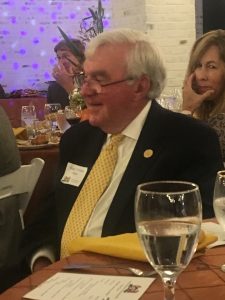 It is with a broken heart that I write about the untimely death of Justice Harris Hines, former Chief Justice of the Supreme Court of Georgia. Below is a wonderful obituary by Katheryn Tucker of The Daily Report.
Justice Harris Hines was a walking example of how we, as lawyers, should conduct ourselves both professionally and personally. He had a wonderful sense of humor and could tell a story better than Mark Twain. Our family enjoyed a close relationship with him and his beautiful wife, Helen, and I will be eternally grateful for the times we had together. They knew our daughter was a soccer goalkeeper in high school and often compared it to being the parents of a football field goal kicker, as they were with their son, Hap. We connected knowing that your child, as goalkeeper or as field goal kicker,  could end up being the the MVP of a win or could be the blame for a heartbreaking loss. We enjoyed many dinners and State Bar trips together. One of my favorite moments was riding back to Jekyll Island on the bus from Jacksonville after UGA had beaten Florida and calling Justice George Carley to share the victory with him on the speakerphone. We sipped Woodford Reserve bourbon together on an Executive Committee trip to Lexington, Kentucky and often shared that fond memory with each other. I am thankful that just two weeks ago Bill and I enjoyed dinner with him and Helen at the  American Board of Trial Advocates (ABOTA) dinner and we once again got to experience Harris’s sparkling sense of humor and laughter. He was proudly a Georgia Bulldog, and referred to The University of Georgia as simply “The University.”  When we told him that our daughter, Alex, had just been admitted to the University of Georgia Law School, he was as proud and as happy for her as if she were his own grandchild.
I think the mark of a man can be summed up in one of my favorite scriptures, 1 Corinthians 13:1, that begins Love is patient, Love is kind. I believe we can easily substitute “Harris” for “Love” in that scripture , and that should give you the essence of Harris Hines: Harris was patient, Harris was kind, Harris was not jealous, Harris did not brag, Harris was not arrogant, Harris was  not easily angered, Harris did not keep a record of wrongs, Harris did not rejoice in unrighteousness but rejoiced in truth.
I am heartbroken right now. I send my love to Helen. I am crying as I write this for the loss of my friend. To say I and all of his other friends will miss him does not do his memory justice. I loved Harris Hines and I take comfort knowing that Love bears all things and endures all things. We are all better for having known Harris Hines. We should all try to live a life that would honor  his example.

“To say I and all of his other friends will miss him does not do his memory justice,” said trial lawyer Robin Frazer Clark. “We are all better for having known Harris Hines. We should all try to live a life that would honor his example.”

Retired Georgia Supreme Court Chief Justice P. Harris Hines was remembered Monday by his many friends for his half-century career in the law, but even more for his humanity.

“It is with heavy hearts that we announce the sudden passing of our beloved former Chief Justice, P. Harris Hines,” the high court said in a statement Monday morning. “Justice Hines was killed Sunday afternoon, Nov. 4, 2018, in a car crash on I-85 North near downtown Atlanta. His wife, Helen Hines, was with her husband in the car and survived the crash.”

“We are all shocked and devastated,” Chief Justice Harold Melton said in the statement. “Former Chief Justice P. Harris Hines was a giant of a man. Because of the love he so freely extended to others, he was loved and cherished by every member of this Court, by our staff, and by just about every person who ever met him. For me personally, he was a mentor and one of my dearest friends. My heart is broken. Our thoughts and prayers are with his beloved wife, Helen, their son and daughter, and their families.”

Hines, 75, had just retired at the end of August after 50 years of practicing law and 44 years serving as a judge in Cobb County and as a justice on the Supreme Court of Georgia. Hines said on his last day of work that he had many plans: He wanted to serve as a senior appellate judge and was considering returning to law practice and maybe even getting into real estate. But first, he was looking forward to celebrating his 50th wedding anniversary and taking his wife on a fall trip to their favorite beach at St. Simons Island on the Georgia coast.

Hines and his wife were on their way back home to Marietta Sunday after watching their granddaughter sing during worship at Newnan Methodist Church. Friends said the car went too close to the concrete barrier, then overcorrected and flipped. They were both taken to the Grady Memorial Hospital emergency department. Hines died soon afterward.

Friends began gathering by Helen’s side at Grady. Melton was there. So were longtime friends Marietta Mayor Steve Tumlin and former U.S. Rep. George “Buddy” Darden, now of Pope McGlamry.

“I don’t know anybody who has more friends,” Darden said Monday. Darden and Hines first became friends through their wives, Helen Hines and Lillian Darden. Hines was practicing law, and Darden was then Cobb County district attorney.

“He was the quintessential gentleman, always courteous, respectful of all appearing before him—jurors, attorneys, parties, witnesses, court personnel, and even criminal defendants,” Darden said. “He was decisive, punctual, and his integrity was beyond reproach. He loved the law and always sought to use it to do justice.”

Tumlin said he and his wife became friends with the Hines family soon after they moved to Marietta because of working together on civic projects and raising their children together. Tumlin said Hines was known for his kindness, for never raising his voice, for always taking the time to talk. He said the couple were known for walking to the Marietta Square for dinner together a few nights a week. Tumlin had sat with Hines in the rain to watch a Marietta High School football game on Friday night the week before last.

“Our whole community is shook up,” Tumlin said. “Harris touched so many people.”

“We are all heartbroken,” Georgia Court of Appeals Chief Judge Stephen Dillard said in a statement posted on the court website Monday. “Justice Hines was an outstanding jurist and an even better man. He was also a dear friend and colleague to all of the judges on our Court. We will miss him dearly, and our thoughts and prayers are with his family.”

“What I recall was his patience and sincerity. It was important to him to do the right thing. He treated everyone with the utmost respect,” Klein said Monday in an email. “He only needed to ask your name once and he remembered it.  On that day, I left that hearing — but more importantly my client left that hearing — feeling and believing that justice had been served and that the judicial branch does look out for everyone – even the little guy.  That’s exactly what we need to assure the public has confidence in our justice system.”

“Georgia has lost a great man, husband, father, friend, and judge,” said State Bar of Georgia President and Georgia Court of Appeals Judge-Elect Ken Hodges. “I don’t recall ever walking into a room where Chief Justice Hines was that was not brightened by his smile and his genuine and warm personality. He loved his family, his friends, the law, and his Georgia Bulldogs. He was an inspiration and example to emulate. Altruistic to the core. A sad day indeed.”

Gov. Nathan Deal called Hines “a brilliant legal mind and a devoted public servant,” expressing his sadness in a statement and a tweet: “Justice Hines’ more than four decades on the bench helped to make Georgia a better state. Sandra and I are praying for his family and thinking of his dear wife, Helen, as she recovers. May God bless them with love and great strength during this most difficult time.”

Jim Butler of Butler Wooten & Peak said, “He was always a fair-minded judge and a positive and gracious man. He will be missed.”

Ambassador to Luxembourg Randy Evans, a former partner with Dentons and former co-chair of Deal’s Judicial Nominating Commission, called from a meeting in Brussels to say that Hines was “the embodiment of a good, trusted judge.”

“He was always such a cheerful warrior,” Evans said. “He would say something that would make you feel better about yourself and about life.”

“What a wonderful trait for a judge, for anyone,” Daniel said. “We truly will miss him.”

Robin Frazer Clark, former president of the State Bar of Georgia and the Georgia Trial Lawyers Association, was in Statesboro doing prison depositions Monday. But she took time to gather her thoughts about Hines to share in an email.

“Justice Harris Hines was a walking example of how we, as lawyers, should conduct ourselves both professionally and personally. He had a wonderful sense of humor and could tell a story better than Mark Twain,” Clark wrote.

Clark recalled trips and dinners that she and her husband, Bill, have shared with Harris and his wife. University of Georgia football and Woodford Reserve bourbon were mentioned.

“I am heartbroken right now. I send my love to Helen. I am crying as I write this for the loss of my friend,” Clark said. “To say I and all of his other friends will miss him does not do his memory justice. I loved Harris Hines and I take comfort knowing that Love bears all things and endures all things. We are all better for having known Harris Hines. We should all try to live a life that would honor his example.”