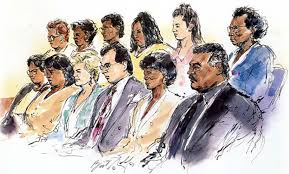 Jury duty is often the last thing people want to do. It interferes with their jobs, their family schedules and essentially everything people do on a daily basis. No one has jury duty scheduled on their calendar.  So, it is often the case once citizens report for jury duty and are actually sitting in a courtroom going through jury selection, particularly in civil cases for money damages, that jurors want to know “Why is this case being tried?  Why am I here?” Some people might, wrongly, assume it is because the plaintiff is greedy. But that is almost never the case. Rather, so often, the answer is because the insurance company for the defendant, the party at fault, refuses to be reasonable and refuses to resolve the case before trial.  For some unknown reason, that seems to be more and more the answer to the jurors’ questions of “Why are we here?”

Several recent trials in Georgia demonstrate that completely. In a trial in Gwinnett County last month, a jury awarded $17.8 million to the widow of a man who plummeted three stories to his death after trying to close an improperly installed dormer window.  No offer of settlement by the insurance company who represented the company at fault was even made until six days before trial. Understand, the trial occurred only after years of depositions, hearings, document exchange…known as discovery. Yet the insurer didn’t even attempt to broach resolution until six days before trial. The plaintiff’s settlement demand had only been $1 Million. Now the insurer is looking at a judgment for $17.8 Million. The insurer could have saved $16.8 Million had it even attempted resolution.

In another case recently tried in Cobb County, the jury returned verdicts for two plaintiffs of $77,000.00 to one plaintiff and $80,000.00 to the other. They also awarded an additional $35,000.00 for property damage. Highest offers prior to trial were $4,000 and $5,000 respectively.  Yet the plaintiffs’ medical expenses alone, without even considering pain and suffering, were $12,000 and $9,000 respectively.  When an insurer offers half of a plaintiff’s medical expenses it is not really trying to reach a good faith resolution of the case.

A Chatham County jury last month returned a verdict in excess of $4 Million in a car wreck case in which the insurer, Progressive Insurance Company, had offered nothing…zero…before trial. In another case against MARTA, in the Superior Court of Fulton County, the jury returned a verdict of $25 Million. There were no offers of settlement before the trial.

I have a case pending in the Cherokee County State Court in which my client was rear-ended in a car wreck on I-575 in Canton. The Defendant admits the wreck was his fault. My client’s medical expenses for medical treatment he had to get as a result of his injuries from this car wreck total approximately $70,000.00.  There has been no offer of settlement by the insurance carrier despite my attempts to resolve the case without trying it. We are set for trial in that case in April 2019.

And so we are forced to go to trial, for a jury to assess what is a reasonable value of the case. Thank God we have such a wonderful system as the American Jury and our Civil Justice System.  I wish we could let our juries know the reason we are taking up their time and intruding on their schedules is because there has been no attempt at good faith resolution by the insurer for the at-fault party. But our Rules of Evidence forbid that. Fortunately, for our clients, the juries, as demonstrated above, get it right.