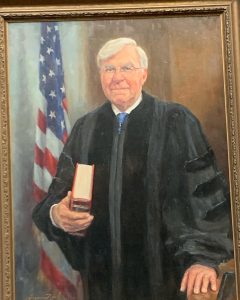 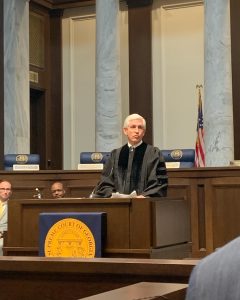 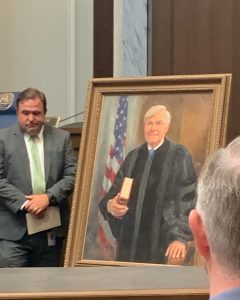 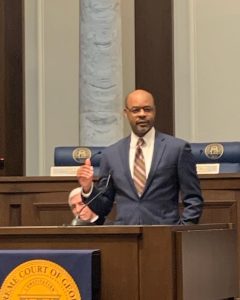 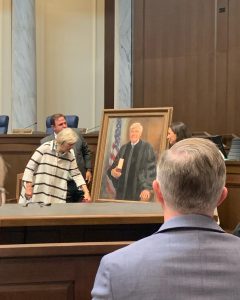 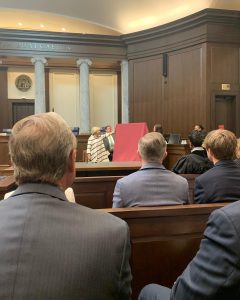 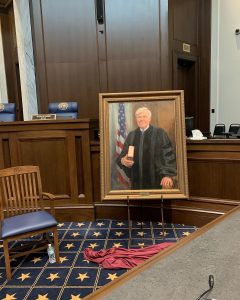 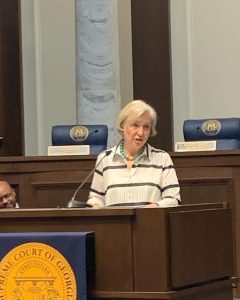 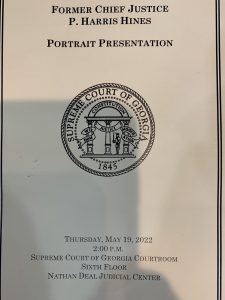 I recently had the honor of attending the dedication of the portrait of Justice Harris P. Hines and the portrait’s official installation at the Nathan Deal Judicial Center in the Georgia Supreme Court Courtroom. Justice Hines and I were good friends, and his beautiful wife, Helen Hines, remains my good friend. Helen spoke at the dedication and said this about her husband of 46 years:

“Harris will be remembered as a judge and as a justice who loved people, and served the citizens of Georgia. He will be remembered for how he touched the lives of others, traveling throughout the state for over four decades. He spoke to civic clubs and legal groups, delivered introductions and invocations, taught continuing legal education courses, judged mock trials and debates, moderated panel discussions, counseled anyone who sought his guidance or advice — greeting people with sincerity and warmth. He never seemed to tire of talking — I’m on stop right there. He never seemed to tire of talking — to them, and inquiring about their lives and their families. He cared about individuals and treated them all with respect and fairness. Hard work, courtesy, integrity and kindness are the real legacy Harris leaves,” she concluded.

Chief Justice David Nahmias spoke. Former Chief Justice Harold Melton (now private lawyer) spoke and said this about Justice Hines: “Everybody here knew and loved Justice Hines, and everybody has the same impression of him and of his kindness,” said Troutman Pepper Hamilton Sanders partner Harold Melton, who succeeded Hines as chief justice and was his close friend, though they were 23 years apart in age. But Melton said for this occasion he wanted to remember Hines as a lawyer.  “It’s appropriate that we also talk about his legal legacy and his commitment to the fidelity of the law, how painstakingly he pored over the law and how determined he was to get it right,” Melton said.

When Justice Hines passed unexpectedly, just a month after his retirement from the bench, I said this: “Justice Harris Hines was a walking example of how we, as lawyers, should conduct ourselves both professionally and personally. He had a wonderful sense of humor and could tell a story better than Mark Twain,” said Atlanta lawyer Robin Frazer Clark, former president of the State Bar of Georgia and the Georgia Trial Lawyers Association.

Let me share some of my favorite memories of Justice Hines.

First, I had the honor of trying a case in front of Justice Hines when he was on the Cobb County trial bench. That was a long time ago. I don’t even remember what kind of case it was. I do not remember who my opposing counsel was. The only thing I remember from the trial is that after closing arguments and after the charge was read to the jury, then Judge Hines invited all counsel into his Chambers simply to chat…just to talk as friends, not as adversaries, about life, about work as a trial lawyer, about Georgia Football, about your family. Just about life. This used to be an old, rather famous tradition that Georgia trial judges did after a trial while the jury was deliberating. You really got to know your opposing counsel and the trial judge well that way. And it promoted civility between adversaries. Sadly, not many trial judges do that any longer. The last one that did that in one of my trials was Judge Tripp Self, back before he became a United States District Judge and was a Superior Court Judge.  We had just tried a contentious wrongful death trial in front of Judge Self in Peach County, Georgia and he invited us back to his Chambers to chat and spend time together while the jury deliberated. We enjoyed a cup of coffee on Peach County together back there and I became good friends with Judge Self and my opposing counsel after that. I regret that trial judges no longer carry on this tradition and the lack of civility it used to foster is apparent.

Second, my husband, Bill Clark, and I became good friends with Justice Hines and his wife, Helen, during many State Bar trips and meetings together. We enjoyed countless meals together during these trips.  They watched my children grow up.  They never failed to ask about our children and what they were doing.  Their son, “Hap” Hines, had been the  kicker for University of Georgia Football team years ago. My daughter, Alex, was in the thick of playing goalkeeper for her high school team and her travel soccer team. Justice Hines often told me stories of when Hap was playing for UGA and how stressful it was for them as his parents watching him play when sometimes the entire game came down to his field goal kick. Win or lose, it was all on Hap. Justice Hines often compared that to being the parents of a soccer goalkeeper, when the entire game could come down to whether the goalkeeper makes a save to win the game…or whether the kicker makes the field goal to win the game. We united in knowing how anxiety-provoking that was for the parents. We also commiserated as parents of soccer superstars, as their daughter,  Mary Margaret, played college soccer at Rhodes College in Memphis. We often joined in solidarity about what lengths soccer parents are willing to go to see their child play and support their child. I remember one rather famous time when they had planned to drive to Memphis to see Mary Margaret play in her college game on Saturday.  But they didn’t leave  for Memphis until after Hap’s high school football game on Friday night so they wouldn’t miss a game of his. This was well before the conveniences of email, text messages or cellphones. So the Hines left for Memphis in the middle of the night, in the rain, as I recall, to make it to Memphis on Saturday to watch Mary Margaret play, only to find out when they arrived, exhausted, that Mary Margaret had received a red card in the prior game and so she had to sit out this game and wouldn’t be playing! Only travel soccer parents would understand and relate!

Another wonderful memory I have of Justice Hines is one night when we were on the bus heading back to Jekyll Island from the Georgia/Florida Game in Jacksonville, Florida. Georgia had won! Bill and I sat in the seats directly behind Justice Hines and Helen on the bus. Justice Hines’s phone rang. It was our good friend Justice George Carley! Justice Carley’s health would not allow him to travel to the game that year, but he had watched the game on television and had even switched ties at halftime (as he was known to do to foster a win) to help the Bulldogs win. Justice Carley called just because he wanted to share in the moment with Justice Hines. Justice Hines put Justice Carley on speakerphone and the five of us celebrated a wonderful DAWGS win together on the bus. What a wonderful evening that was that I will never forget.

Another favorite memory of mine is a time when the Georgia Supreme Court held oral arguments in the moot courtroom at UGA Law School. My daughter, Alex, was still a law student then and she attended the oral arguments in person. I watched online. As usual, there were several new lawyers present who were seeking admission to the Georgia Supreme Court before oral arguments began. These new lawyers were sworn in and then Justice Hines offered them a welcome on behalf of the Court and some friendly life advice. He invoked my name when he said that “State Bar President Robin Clark always said in making decisions she would ask “What’s the kind thing to do?” and to “look at everything through the eyes of kindness.”  And then Justice Hines emphasized to these young lawyers they should always choose kindness and they would benefit from that choice for their entire careers. That Justice Hines said my name while my law student daughter was present in the audience meant so very much to me and to her. He was like that.  He always implored lawyers to do the kind thing. Be kind.

Justice Hines was one of the kindest people I have ever known. He reminded me of my father and my grandfather. I admired him as a person.  Without question he was a remarkable jurist. He was strong in his Faith. He was the consummate storyteller. He loved BBQs. He often couldn’t finish a story due to his laughing so much. He had a genuine laugh. The State of Georgia undoubtedly has a void without his presence here. Helen and his family and his friends wish he could still be here with us, but we take comfort in knowing we’ll see him again.

I guess I just miss my friend.