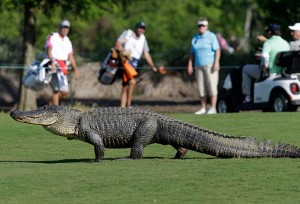 Although alligators inhabited the area of The Landings before and after its establishment, no person had ever been attacked until the night of October 5, 2007, when Williams, who was 83 at the time, *398 went for a walk near one of the lagoons near her daughter’s home some time after 6:00 p.m. The following morning, Williams’ body was found floating in the lagoon.2 Williams’ right foot and both forearms had been bitten off. Later, an eight-foot alligator was caught in the same lagoon, and, after the alligator was killed, parts of Williams’ body were found in its stomach.

Landings Ass’n, Inc. v. Williams, 291 Ga. 397, 397-98, 728 S.E.2d 577, 579 (2012).  The landowner’s duty under Georgia law is based on the comparison of knowledge of the hazard on the property between that of the landowner and that of the victim. The Landings Association Court reiterated ‘[t]he true ground of liability is the proprietor’s superior knowledge of the perilous instrumentality and the danger therefrom to persons going upon the property. It is when the perilous instrumentality is known to the owner or occupant and not known to the person injured that a recovery is permitted.’ [Cits.] One who is familiar with the premises cannot rely for recovery upon the negligence of the defendant in failing to correct a patent defect where such party had equal means with the defendant of discovering it or equal knowledge of its existence.” The Supreme Court then held against the victim and in favor of the Landings Association (landowner) on the basis the victim knew there were wild, dangerous alligators indigenous to the property roaming around and knew that she may come face to face with one should she decide to take a walk on the property. The Court found the landowner did not have any superior knowledge of any potential hazard the alligators presented compared to the victim’s knowledge.

So, what will happen in Florida?  I assume the parents are consulting with attorneys about their options. You don’t lose a two year old child at a hotel and not want to hold someone responsible for the cihild’s death. The presence of the chaise lounge chairs and the sandy beach next to the lagoon, all placed there by Disney, seems to suggest Disney meant for its guests to sit and play by the water. A warning for “no swimming” may not be exactly the same as a warning not to wade along the edge of the lagoon. And perhaps guests there assume Disney has cleared the lagoon of any potential hazards to its guests, including possibly alligators. Stay tuned and stay alert out there.