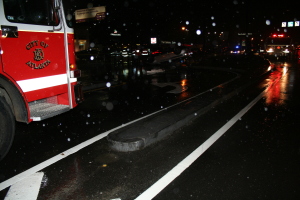 I have written before about my case against the Georgia Department of Transportation and the City of Atlanta about  a defective median installed in the middle of the City of Atlanta’s busiest street, Peachtree Street, in the heart of Buckhead at the intersection of Peachtree Street and Piedmont Road. This intersection may well be one of the busiest intersections in Buckhead, the city’s premiere retail, hotel and financial district. This median was installed in October 2007 and was opened for the motoring public without sufficient warning signage and without sufficient lighting. My clients’ daughter was killed in 2008  in a single car accident when the driver of her car hit the median, because it was not readily visible and was not appropriately marked. We filed suit in back in 2010 and are still fighting four years later. Various appeals have lengthened the litigation. We continue to fight. On November 12, 2014, we received a wonderful opinion from the Georgia Court of Appeals that will allow us to proceed with a jury trial against the City of Atlanta. Below if the opinion. We had already received a similar opinion regarding our claims of negligence against the Georgia Department of Transportation.  This puts us one more step toward justice for the family.