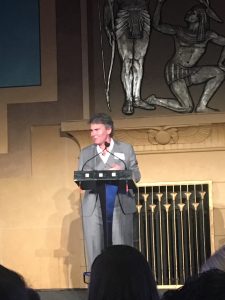 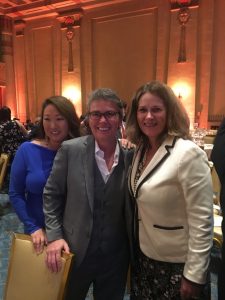 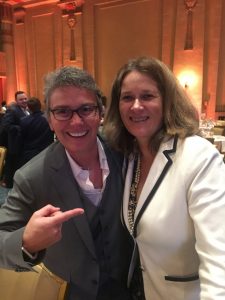 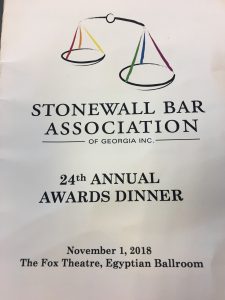 Last night I had the honor of introducing the recipient of the 2018 Stonewall Bar Association Conspicuous Service Award Winner, Judge Alex Manning. We had a wonderful evening with several hundred of my closest friends in the Fabulous Fox Egyptian Ballroom.  Judge Manning gave an incredible, inspirational acceptance speech. I did not have all the time I wanted to introduce her.  She has an awe-inspiring personal story and she is an example of service to her community. To further honor Judge Manning, I want to share my full introduction of her here.  I am proud to know Judge Manning and proud to call her my friend.  What a great night!

It is my distinct pleasure and proud honor to introduce to you tonight, the recipient of the Stonewall Bar Association Conspicuous Service Award, the Honorable Alexandra Manning.

Judge Alex Manning is a Judicial Officer in the Family Division of the Superior Court of Fulton County. She presides over some of the most contentious and sensitive calendars in Fulton County, including Child Support Contempt, TRO’s and Name Changes. She consistently and with the utmost respect for the rule of law and for the dignity of all those who appear before her, Judge Manning presides with both a firm hand and compassion. Judge Manning often handles name change petitions for transgender persons. Those who are seeking gender affirming name changes are often the most marginalized in our society and so come to court, understandably, vulnerable, with fear and intimidation of the formal court procedures. Many expect a judge who has little interest in helping them achieve their goal and even less understanding of why they desire to do so in the first place. You can imagine most of their reactions when they meet Judge Manning, who treats them with the dignity and respect they deserve but which they have rarely experienced by the government. Even though in 2018 we are still seeing some Superior Court judges refusing to grant a name change to a transgendered person out of some misguided personal beliefs, Judge Manning is not only a breath of fresh air in a sometimes-stagnant environment but is also the standard bearer for how judges should treat all citizens who come before them.

Judge Manning constantly demonstrated her support of the LGBTQ community before taking the bench. As a practicing lawyer she participated on a pro bono basis as co-counsel in a same gender marriage case in Dooly County, prior to the passage of Obergefell v. Hodges, in which she was able to protect the rights of a surviving spouse married in Washington, D.C., at a time when Georgia did not recognize same gender marriages. She also represented one of the first transgender individuals in the process of playing as a competitive NCAA athlete on the team that matched with gender identity. In her practice as a family lawyer she made handling second parent adoptions for LGBTQ parents a priority, even when not all Georgia court were even permitting second parent adoptions by a person of the same gender as the original adoptive parent.

Long before her legal career, Judge Manning established herself in law enforcement.  She was a pioneer as one of the first waves of female certified firefighters in DeKalb County.  She then went onto become a lead narcotic agent in the Georgia Bureau of Investigations and was appointed to the Governor’s Strike Force. She then became a Detective and K-9 handler and received both a Medal of Valor and Police Officer of the Year. While obtaining her undergraduate degree from Mercer University, Judge Manning worked as Senior Investigator with the Fulton County District Attorney’s Office in the Crimes Against Women and Children Unit and also at the Douglas County Public Defender’s Office. She then went to Vermont Law School and graduated in May 2006.

I first met Judge Manning when I was introduced to her at Lawyers Club by her loving partner, Lisa Liang. Lisa had wanted us to meet after learning I had successfully represented an Army Veteran in obtaining a Presidential Pardon for his military conviction of Conduct Unbecoming an Officer. His so-called unbecoming conduct was having a homosexual relationship with another man in the Army.  My client was convicted and served two years in Ft. Leavenworth Prison and then was dishonorably discharged.  After six years of representing him, we were overjoyed when we received word from the Pardon Counsel in the Department of Justice that President Obama was pardoning my client.  As it turns out, Judge Manning endured a very similar episode in her life.  Years before she distinguished herself as a GBI narcotics agent and before she was a Medal of Valor recipient and before she was named Police Officer of the Year, and before she became a respected judge on the Fulton County Family Court bench, she was discharged from the United States Army while a private.  The reason for her discharge?  Failure to adapt to military standards, which is Army speak for she was gay. Judge Manning disclosed this for the first time to attendees at a Vermont Law School conference on what was then the Federal policy on gays in the military, “Don’t Ask Don’t Tell (DADT). After revealing her long-kept secret, Alex began advocating for the repeal of DADT, including nationwide petitioning institutions of higher learning to ban military recruiting on campuses until DADT was repealed. Vermont Law School was one of the first to do so.  Alex continued this important advocacy in Georgia until DADT was finally repealed in 2011.

Can you imagine an American citizen wanting to serve her Country and being told the only reason she won’t be allowed to do so is who she loves?  Sounds crazy, doesn’t it?  But, although DADT has been abolished, and although same gender citizens may now be married in any state in the United States, it would be wrong to say we are out of the woods of discrimination and we don’t ever have to worry about that again. We need look no further than to our current Administration’s constant threat to reinstitute a ban on gays and transgendered people in the military.  Or the current Justice Department’s intervening in a private employment lawsuit arguing that the ban on sex discrimination in the Civil Rights Act of 1964 does not protect workers on the basis of their sexual orientation. Or the recent sentencing of a gay man to death by a South Dakota jury because sending him to prison for life would be sending him “where he wants to go and he shouldn’t be able to spend his life with men in prison.”  The United States Supreme Court refused to grant the defendant’s certiorari petition on the basis of what was clearly anti-gay bias of the jury. Thus, you see why we must continue fighting the good fight.

In last year’s Pena-Rodriguez v. Colorado, 137 S. Ct. 855, 868, 197 L. Ed. 2d 107 (2017), Justice Kennedy wrote that “racial bias [is] a familiar and recurring evil that, if left unaddressed, would risk systemic injury to the administration of justice. This Court’s decisions demonstrate that racial bias implicates unique historical, constitutional, and institutional concerns. An effort to address the most grave and serious statements of racial bias is not an effort to perfect the jury but to ensure that our legal system remains capable of coming ever closer to the promise of equal treatment under the law that is so central to a functioning democracy.”  Until we can easily substitute “sexual orientation bias” with “racial bias” in this sentence, we have not realized the Constitution’s promise of justice for all.

So, it is not hyperbole to say Judge Manning is a true American hero, for her example, for her sacrifice, for her honesty and openness, for her dedication to equality and to justice for all.  She is exactly who we want on the bench, who can bring to bear her toughness forged by personal struggle but tempered with deep compassion. And it is with that courage in mind that tonight we fittingly honor Judge Alex Manning.