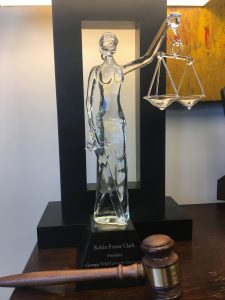 My personal experience last week in trial on behalf of a deserving client also has my mind on the qualifications a trial judge needs to perform her or his job with even a minimum amount of adequacy and competency. I have practiced law in Georgia now roughly 30 years and have tried nearly 100 cases and never in my entire career have I ever personally observed a trial judge make so many legal errors and make so many biased rulings that I felt my client’s constitutional rights to a fair jury trial were violated. In Georgia, as I am sure in most states, we have Judicial Canons and  a Judicial Code of Conduct, with which, at a minimum, trial judges are expected to comply.  Judicial Canon 1.1 requires judges to preserve judicial independence, integrity, and impartiality. The first sentence of that Canon states:  “An independent and honorable judiciary is indispensable to justice in our society.”  When a trial judge is not treating both parties equally and fairly, it is obvious to everyone in the courtroom, especially the jurors. After the trial last week I had the opportunity to speak to some of the jurors as they left the Courthouse. Many said they wondered why the judge treated us so poorly and felt so bad for my client they wanted to hug her.  The trial judge didn’t even bother hiding how unfairly she treated us in front of 12 jurors who are all voters in the county.   Canon 3 states:  “Judges Shall Perform the Duties of Judicial Office Impartially, Competently, and Diligently.”  This seems to state the obvious, but the nomination to the bench of the 3-year lawyer from Alabama who has never tried a case draws into question how in the world could he possibly be competent to rule on evidentiary issues (just one example) when he has never even tried a case?  Does he even know the definition of hearsay and the applications of the exceptions to the Rule? Which reminds me, the judge in my trial last week applied the old Georgia evidence rules that have not been in effect since December 2012. Georgia’s new evidence rules became effective on January 1, 2013, but, apparently, my trial judge last week was not aware we have been operating under new evidence rules for almost five years now. Nor did she know what hearsay is, thinking that the “declarant” for purposes of hearsay is the witness on the stand, not the person who made the statement that is questioned as being inadmissible hearsay. Not only did this rock all confidence the public (the 12 jurors and the two litigants) have about the fairness of the proceedings, but it made the trial completely unpredictable, which is the exact opposite that you want a trial to be. This trial judge actually admonished me for calling a juror by her last name instead of her juror number, claiming the Uniform Superior Court Rules forbid a lawyer from calling a juror by his or her last name.  Of course, there is no such rule and never has been. I pointed this out to the judge and I think she may have gone back to chambers during a break and read the rule because she later admitted it was not a Uniform Superior Court Rule but was “unprofessional” to call a juror by their name. What???   I have called jurors by their names in every trial I have ever tried.  Jurors appreciate it.  Rule 3.3 of the Judicial Canons states:  “Judges shall perform judicial duties without bias or prejudice. A judge shall not, in the performance of judicial duties, by words or conduct manifest bias or prejudice, or engage in harassment, including but not limited to bias, prejudice, or harassment.”  No question in my mind that this trial judge violated this Rule repeatedly during the trial.  It was readily apparent that the judge treated me and my client with open hostility and attempted to bully us throughout the trial. When I  would not succumb to the bullying and insisted my client’s rights were being taken away from her, the trial judge would exhibit outrage that someone was questioning her authority.  It made me think of that famous scene in the classic law movie “And Justice For All,” in which Al Pacino yells “This whole trial is out of order!”  I knew exactly how Al felt.  But at least I avoided being carried out of the courtroom by the bailiffs!

As a stark contrast, I am reminded of the Atlanta Public School trials, in which numerous teachers were placed on trial for cheating on exams by changing their students’s answers so the results would look better than they actually were. The Fulton County Superior Court judge who presided over these trials was Judge Jerry Baxter, who just recently retired from the bench.  I have tried a case in front of Judge Baxter and personally know him to be courteous, fair, competent and impartial on the bench. He certainly exhibited this conduct during the APS and trials. What is more, he exhibited another wonderful quality to find in a jurist upon the convictions of several of the teachers:  mercy.

We’ll appeal of course, and, hopefully, the Georgia appellate courts will reverse and restore my client’s constitutional rights to a fair jury trial. Of course, there will have to be a motion to recuse when this case gets back to the trial court.  Usually, when we use that phrase, constitutional rights to a fair jury trial, we often think there is some implicit bias in the jury, not the judge, and it is, indeed, unfortunate when the judge herself, through her conduct, causes a violation of a party’s constitutional rights. But it happens, and when it does, we have to resolve to continue fighting the good fight and keeping the faith until Justice is restored. Because only then will the public regain confidence in the judicial system after witnessing first hand from the jury box the epitome of a judge’s undermining of that system.