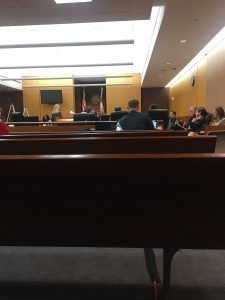 Recently, I was in a courtroom in Fulton County, Georgia watching a medical malpractice trial.  I was not involved in the trial; I was just a trialwatcher. When I have time, I still enjoy watching trials, both civil and criminal, for the real life drama on display. No movie or play can capture the sheer, raw emotion of a trial.  A jury’s decision can be life-altering. In a civil trial for money damages,  a verdict for the plaintiff can give the family of the injured person or decedent a sense of Justice and much needed closure. A verdict for the defendant can give a defendant a sense of vindication. The whole trial process is designed to find the truth. In fact, the word “verdict,” in Latin, means “to speak the truth.”

I have often seen normal laypeople who are testifying realize, on the stand, they have underestimated the emotional pressure that the formality of the courtroom imposes on them. There is something about the utter dignity and formality of the Courtroom, with the judge sitting high on the bench, with a court reporter taking down every word uttered, with 12 citizens sitting in judgment, with a Deputy Sheriff at the door, that brings the enormity of it all into crystallized focus. In this medical malpractice trial I was watching, there was a moment with one of the defendants on the witness stand when he simply broke down during his testimony. He began to tear up on the stand and the began to cry, and the plaintiff’s attorney quickly asked the judge for a break. But it was too late. The defendant began crying uncontrollably, and literally fell down on the floor from the weight of it all. His attorney had to go help get him off the floor and then out of the courtroom as the bailiff quickly took the jury back to the jury room. It was clear that the defendant had suffered something so strong emotionally that he could not go on. We were all worried about his mental well-being. I knew his attorney and knew he would make sure his client was supported emotionally and not left alone.  I believe his attorney was sincerely concerned about his client’s ability now to go on with the trial and meaningfully participate in the trial and assist his attorney. In speaking with several of the attorneys in the case, both plaintiff and defense, not one of us had ever seen something like that happen in a trial before.  Most of us had practiced for over 30 years. Meanwhile, the plaintiff’s attorney felt just as strongly that the defendant’s outburst of emotion directly in front of the jury was so overly prejudicial that the jury could not help but sympathize with the defendant, regardless of any instruction the judge might give to the contrary. Telling a jury they may have no sympathy for either side is easier said than done when a witness has just broken down in front of their eyes.  Discussion was had by all counsel with the judge in the judge’s chambers, and I was not privy to what they discussed and argued. Eventually, the defendant who had broken down on the stand reappeared in the courtroom. He looked shaken and seemed to be trembling. He was visibly trembling as he took sips out of a water bottle. There was no question in my mind that this was sincere and beyond his control. I felt empathy for him. After about an hour, though, the judge and all counsel came back into the courtroom and the jury was brought back into the courtroom. The judge declared a mistrial and thanked the jury for their work and instructed the jury they were no longer needed and that their jury duty had been fulfilled.

A mistrial is something that neither side in a trial wants. For the plaintiff, it means the thousands of dollars spent on this trial, getting expert witnesses to Atlanta and in the courtroom and testifying for a half day or more, is all for naught and just increases the expense of the case with no resolution in sight. It also means putting the loved one of the decedent through emotional turmoil for no purpose without resolution. Likewise, it means the defendants have had to sit through a partial trial, listening to adverse testimony that can’t be all that fun to hear, but without being able yet to tell their side of the story. It is an unsettling ending without any actual resolution. It is deeply unsatisfying, disappointing and discouraging. I have once had a case end in mistrial. When you have to try the same case the second time, it’s a little bit like working out and getting your clothes sweaty, then taking a shower and putting your wet clothes back on.  The mistrial in my case was because of a hung jury, not anything that occurred during the evidence portion of the trial I tend to think even the jury itself doesn’t want a mistrial. They have listened to all of this testimony and yet are deprived of the satisfaction of deciding who should win. Yet, the judge has absolute discretion when to declare a mistrial and is extremely reluctant to do so unless justice demands it. I don’t think anyone could really argue the judge was wrong to declare a mistrial in this situation. I think the judge used her discretion wisely here to say the damage can’t be undone with this jury and that justice demands a Do Over with another jury who didn’t witness what just happened.

After the jury was released, the Defendant who had broken down on the stand asked the plaintiff’s attorney if he could speak to her client, who was the widow of the decedent. She said yes, and I saw the Defendant go and speak to her and then hug her.

I was not close enough to hear what they were saying to each other, but I thought, in that moment, this may have been a little bit of “restorative” justice. That in some small way, this human interaction may have made both parties feel a little bit better about the situation. I believe words of forgiveness were exchanged. Perhaps some healing occurred. It didn’t resolve the litigation, but may have gone a long way toward reconciliation until the case is closed for good.  They will have to meet again, in this same courtroom, with the same facts, but a different jury. That’s what justice requires. Hopefully, this connection made with the widow will help the Defendant get through the next trial, and, hopefully, will allow both to feel better about what has occurred in the past and to appreciate our system of justice a little bit more.  I know I certainly do.