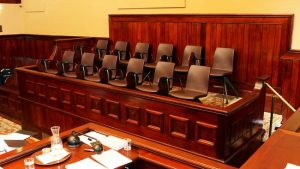 “Isn’t that a jury question?”  As a trial lawyer who has tried 75 jury trials in Georgia, that is my default position, i.e., a jury should decide each issue of fact. Not a trial judge and certainly not an appellate court. Juries perform this task of finding facts every day, in every courtroom in the United States. It’s what juries do…and it’s the very foundation our system of Justice is built upon.

Yet, too often, we see trial judges, and then even appellate judges, invade the province of the jury and decide the case for herself/himself. This, plain and simply, is not allowed. The Standard of Review of a denial of a motion for summary judgment, for example, requires [an appellate] Court to “view the evidence, and all reasonable conclusions and inferences drawn from it, in the light most favorable to the nonmovant. And at the summary-judgment stage, we do not resolve disputed facts, reconcile the issues, weigh the evidence, or determine its credibility, as those matters must be submitted to a jury for resolution.” Orr v. SSC Atlanta Operating Co., 860 S.E.2d 217, 222 (Ga. Ct. App. 2021), reconsideration denied (July 14, 2021). It really can’t be any plainer than that.

The United States Supreme Court, the highest appellate Court in the country, rarely, if ever, even discusses issues of fact, much less decides them. You can imagine my surprise, then, when in today’s oral argument in United States v. Tsarnaev I heard Justice Sotomayor ask exactly that question:  “Isn’t that for a jury to decide?”   Whoa! Wait a minute! What just happened?!  A Supreme Court Justice never asks a question like that, does she? And yet I heard it with my own two ears! Interesting.

Well, it is an excellent question as the Court decides whether there was error in the sentencing to death of Defendant Dzhokhar Tsarnaev following his conviction of murder in connection with the Boston Marathon bombing on April 15, 2013.  The question before the Court was whether the district court committed reversible error at the penalty phase of Tsarnaev’s trial by excluding evidence that Tsarnaev’s older brother was allegedly involved in different crimes two years before the offenses for which Tsarnaev was convicted. Things that make you go hmmmm. Tsarnaev’s only defense was “my brother made me do it.” And for that defense to have any chance of keeping Tsarnaev off death row, the jury would have to believe that he was unduly influenced and corrupted by his older brother, Tamerlan. Turns out there was evidence that Tamerlan had killed three people a couple of years earlier  in Waltham, Massachusetts.  Defense counsel sought to have the jury hear this  “evidence of a gruesome, murderous crime” that would illustrate the “extraordinary influence” of the older brother over other people, especially his 19 year old younger brother.  She argued that, at a minimum, the jury should have heard that evidence to consider the defense of being forced to kill others because of his older brother’s influence.  But the jury never heard this evidence because the trial judge excluded it.  Predictably, the jury found Tsarnaev guilty on all counts and sentenced him to death. But the  First Circuit Court of Appeals reversed, saying the “core promise of our criminal justice system is that even the very worst among us deserves to be fairly tried and lawfully punished.” Despite a “diligent effort,” the appeals court said, the trial judge “did not meet th[at] standard.”  Meaning, the trial judge’s exclusion of this evidence deprived Tsarnaev of a fair trial under the Constitution.

So why did Justice Sotomayor ask in today’s oral argument “Isn’t that a jury question?”  Because our system of Justice allows a jury to decide whether Tsarnaev was unduly influenced in being involved in the Boston Marathon bombing by his brother who was, apparently, a  brutal murderer who had already killed three other innocent people in a sort of Jihadist statement. This evidence would be critical for a jury to know before they decided life or death. But the trial judge decided the issue for the jury. That was wrong.  The jury was in the dark about this when they sentenced Tsarnaev to death. It may have made a difference…and it may not have. The point is to trust the jury to hear the evidence and decide based upon all the facts. But when the trial judge didn’t allow the jury to hear these facts, he or she decided the sentence herself or himself, and took the jury’s job away from them.

Will the U.S. Supreme Court reverse and reinstate the death penalty? Your guess is as good as mine. We have a very Conservative court, full of Federalist Society members who view the world through a unique lens. But if they are honest about it, they would agree that even the worst of people like Tsarnaev, who brutally murder and maim others willingly, deserve a jury to hear all the evidence and decide their fate fairly under the guarantees of our Constitution. That’s what makes us different.