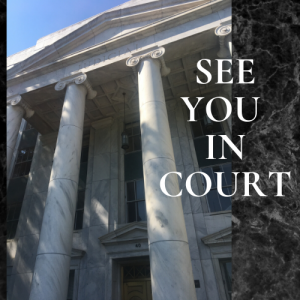 I am happy to share with you that I have recently begun co-hosting a podcast called “See You In Court.” “See You In Court” is a podcast sponsored by the Georgia Civil Justice Foundation, on which I sit as a Board Member.  My co-host is Lester Tate, partner and owner of the law firm Akin & Tate in Cartersville, Georgia.  Lester is also, as I am, a Past President of the State Bar of Georgia and is also a Board Member of the Georgia Civil Justice Foundation.

END_OF_DOCUMENT_TOKEN_TO_BE_REPLACED

As I work at my desk in my office today, I have the voir dire (jury selection) in the retrial of Ray Tensing livestreaming on one of my monitors. Some folks have called jury selection the most boring part of any trial, but it may very well be the most important, because from jury selection comes the group of local citizens who will decide the fate of the parties in the case and really decide what the conscience of the community is regarding the issue being tried. The Ray Tensing case is an excessive force case being tried in Cincinnati, Ohio this week. Tensing is the former University of Cincinnati police officer charged with one count of murder and one count of voluntary manslaughter in connection with the 2015 shooting death of Sam DuBose. The deadly encounter happened during an off-campus traffic stop. Tensing has said he fired his service weapon in self defense. The incident was captured by Tensing’s police-issued body-worn camera. A am watching the criminal trial of Mr. Tensing, who is being tried for on one count of murder and one count of voluntary manslaughter.  There has already been a civil case that settled for money damages against the University of Cincinnati, Mr. Tensing’s employer at the time of the killing.  It is being tried for a second time because the first trial ended in a mistrial.  Watching voir dire or jury selection is helpful to me as a trial lawyer, not only in ideas of potential bias to explore but in hearing how a certain cross-section of our nation feels about jury trials in general. It is interesting that in Ohio, if a lawyer asks the Court to strike a juror for cause, meaning the juror has expressed so much bias about the issues and has stated he doesn’t think he could be fair on the case, the lawyer moves to strike the juror out loud in front of all the other jurors.  For example, one juror who the judge struck for cause said in jury selection that he thought Mr. Tensing “deserved a medal” for shooting Mr. Dubose.  No wonder why he was struck for cause.  In Georgia, we don’t do it that way because of the fear that once the judge strikes one juror for cause, in front of all the other jurors, the rest of the jurors will figure out what to say to get off the jury and then pretty soon all the jurors are gone. So in Georgia we approach the bench and make these sort of motions to the judge at her bench.

Many of the folks in the Tensing jury panel have mentioned the concern and anxiety they had simply upon receiving a juror summons requiring them to be present in court for the jury selection of this case.  They have expressed their bewilderment about whey they of all people in Cincinnati received a juror summons, why they have to be there, why they have to take time out of their jobs and lives to be there…in short, why them?  Why me?

Interesting question, and with a recent opinion issued by the Supreme Court of Georgia, Ricks v. State, infra, regarding how a jury panel is composed, I thought it merited looking into the issue of jury composition a bit deeper.  Georgia has a fairly new Jury Composition Rule that controls the manner in which Georgia citizens will be summoned for jury duty. For use in compiling official lists of potential jurors, the Jury Composition Act directs the Clerks Council to obtain voter registration records from the Secretary of State and driver’s license and identification card records from the Department of Driver Services (“DDS”); the Act also directs the Clerks Council to obtain records on individuals who are ineligible for jury service, including certain records regarding mentally incompetent persons and convicted felons who have not had their civil rights restored. See id. § 1-16 (codified as amended as OCGA § 15-12-40.1 (b), (c)).  Ricks v. State, S17A0465, 2017 WL 2061675,  (Ga. May 15, 2017)