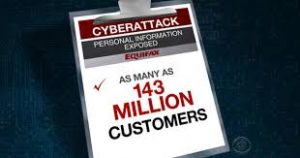 Please be careful and don’t sign up with Equifax for their so-called free credit monitoring;  the cost of giving up your right to sue them is way more valuable.