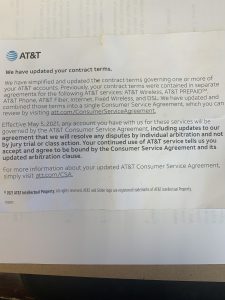 You are probably scratching your head and asking yourself “Self, how can a corporation take away my right to have a jury decide a dispute with that corporation?”  Sounds downright UnAmerican, doesn’t it? The simple truth is that corporations are jumping over each other to be first in line to do just that and so far they are getting away with it.  You will find these hidden arbitration clauses everywhere these days:  when you have a medical procedure, when your loved one enters an assisted living facility, when you book a cruise or when you ride a BIRD scooter, just for a few examples.  Plaintiff’s trial lawyers have been fighting this kind of sneaky, hidden, forced, unilateral arbitration clauses for years. You can read more about it on the American Association for Justice’s website. Why do they want to force an arbitration clause on you?  Because they fear the Justice that a group of 12 local citizens would give an ordinary walking-around person when the corporation has screwed that individual. So far they are getting away with it.

But not so fast.

Enter the Georgia Court of Appeals. In a recent wrongful death lawsuit against Uber Techologies, Inc., Uber asserted as a defense an arbitration clause that was hidden in the Uber app when a customer was asked to input his or her credit card information to register for the ridesharing service.  The trial judge granted Uber’s Motion to Compel Arbitration of the lawsuit (rather than allowing it to proceed to a jury in court) on the basis of this unilateral arbitration clause.  But the Georgia Court of Appeals disagreed. In Thornton v. Uber Technologies, Inc., the Georgia Court of Appeals reversed the trial judge’s order compelling a wrongful death case against Uber into arbitration, ruling there was evidence that the tiny link to the cellphone app’s terms of service, including its mandatory arbitration provision, was hidden by a pop-up keyboard allowing a user to input his credit card information.

As detailed in the ruling, an Uber user registering via a cellphone must download its app to create an account, and is then directed to a screen and instructed to provide contact information and a password. The next screen requires that the user input credit card or PayPal information. “The top portion of the payment screen contains fields for the user to input his credit card information,” the opinion said. “The middle portion of the screen contains a button labeled ‘Register’ and a button to link a PayPal account. Underneath the two buttons, near the bottom of the screen, small, dark gray text reads ‘By creating an Uber account, you agree to our terms & conditions and privacy policy.’” There is a blue, underlined hyperlink to the words “terms & conditions and privacy policy” that, when clicked, links to those conditions, which include a stipulation that any dispute must be settled through arbitration. There was evidence that someone using an Android smartphone would see a keyboard at the bottom of the screen when they clicked through to enter their credit card information that concealed the terms-and-condition hyperlink but not the “register” button. “The evidence raises questions of whether the on-screen keyboard concealed the text so that the terms and conditions were either never displayed or displayed for an unreasonably short amount of time such that Thornton would not have seen them,” the opinion said.

In the Uber app, there were also similar language that is found on the AT & T postcard I received above. The Uber app said, similarly, that continued use of the Uber app would be tantamount to consenting to arbitration and consenting to the unilateral taking away the user’s right to a jury trial.  But there was no evidence the decedent in this case actually received that notice.  The Georgia Court of Appeals held: “We thus conclude that a question of material fact remains as to whether Thornton received the subsequent email and assented to the updated terms and conditions.”

I’ll be keeping a close eye on whether Uber petitions the Georgia Supreme Court for Certiorari in this case. I won’t be shocked it if does.

In the meantime, try to read any documents sent to you by any company you do business with. Cross through any such unilateral forced arbitration clause. I have done this many times and companies simply accept my changes. They want my business. With regard to AT & T, I am sending it a letter stating I don’t consent to their attempt to take away my right to a jury trial without my consent. My guess is that my letter will end up in File 13. We shall see. Stay tuned.