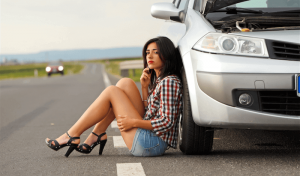 I noticed this morning with sadness that a young woman was killed on I-285 last night when she got out of her car. Police said the accident happened around 10 p.m. on I-285 NB between South Cobb Drive and Atlanta Road.  There is no mention of why she left her car to become a person-on-foot on I-285, which is, by the way, one of the deadliest freeways in the United States. Whatever the reason, your car breaks down, or you have a medical emergency, you have a flat tire, or whatever...do not get out of your car on a highway. Getting out of your car of a highway is also one of the deadliest things you can do, even if you stay in an emergency lane. It doesn’t matter, it is still dangerous. “You are better protected in the car than anywhere else,” said Cathleen Lewis, director of Public Affairs and Government Relations for the Northeast division of AAA.

I represent a Good Samaritan right now who saw a car on the side of the way, apparently, having car trouble. He stopped to help because he is a good person. Unfortunately, while he was on foot trying to help the people in the stalled car, a van hits him and catastrophically injures him. He survived, but has not been able to return to work since. I hate to tell people stop helping others, stop being a Good Samaritan, but being a Good Samaritan can get you killed.  Do not get out of your car on a highway or interstate. Remain in your car and call 911 or your roadside assistance. Wait in the car until they get there. There is no safe place to be on the outside of your car.  Stay in your car!

It is so dangerous out there on our Georgia roads. Stay safe!

END_OF_DOCUMENT_TOKEN_TO_BE_REPLACED

Taking a stroll down the streets of Atlanta can be a healthy pastime or a means of getting in your social interactions for the week, but the cheapest form of transportation is quickly becoming one of the more dangerous. One unfortunate story in Smyrna, GA last week tells of a pedestrian fatality at the hands of a distracted driver; the driver made a phone call, drove off of the roadway, and struck the pedestrian. Another upsetting story in the AJC last week reported of a woman killed in Atlanta as she attempted to cross I-75 and was struck by multiple cars. Recent reports suggest that she attempted to run across the highway due to a dispute over drugs that resulted in someone chasing her. Unfortunately, this story is just one of many that could be written in Georgia this year, as pedestrian fatalities are on the rise on the national level. From 2007 to 2016, the number of pedestrian fatalities increased by 27%, and whether the victim is a harmless pedestrian walking to work or drugs are at play, researchers are not quite certain what is the main cause for the increasing numbers of pedestrian fatalities in the recent years.

Reports over the last few years have found a few potential factors to the increasing fatalities. Obviously, cell phone usage is an issue. Whether a distracted driver is using a phone while operating a vehicle or a distracted pedestrian has his or her face buried in the phone while walking through a crosswalk, cell phones are making us more distracted, less aware of our surroundings, and slower to react when we encounter danger. Cell phone use increased by 236% in the years 2010 to 2016, providing greater opportunity for cell phone related pedestrian accidents.

Many studies and reports suggest the increase in cell phone usage could be a leading cause of pedestrian involved accidents, but a new study provides an interesting possible factor in the rising number of pedestrian fatalities: marijuana. The report does not intend to imply direct correlation of any sort but merely suggests that the possible impairment of judgment and reaction time — for both drivers and pedestrians — due to recreational use of marijuana could lead to higher pedestrian incidents on the roadway. The study found that in DC and the 7 states that legalized recreational use of marijuana between 2012 and 2016, there was a collective 16.4% INCREASE in pedestrian fatalities between the first 6 months of 2016 and the first 6 months of 2017. Conversely, in the remaining states, there was a collective 5.8% DECREASE in pedestrian fatalities between those two time spans.