May 1st is traditionally known as “Law Day” in America, a day in which the rule of law is celebrated. It was officially designated “Law Day” by Congress in 1961. Law Day underscores how law and the legal profession contribute to the freedoms that all Americans share. Georgia lawyers have already been holding events around the State to celebrate Law Day 2013. The State Bar of Georgia recently hosted hundreds of school children at the State Bar Center to celebrate Law Day in a program called “Realizing the Dream: Equality for All!” Below are my remarks for this wonderful celebration.

Realizing the Dream: Equality for All!

END_OF_DOCUMENT_TOKEN_TO_BE_REPLACED 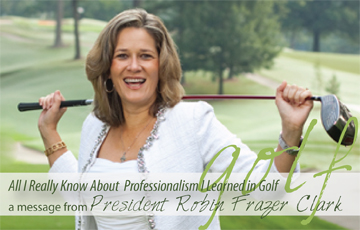 You probably recall Robert Fulghum’s popular book, All I Really Need to Know I Learned in Kindergarten, which was first published in 1988. Its premise was that the world would be a better place if we simply adhered to the basic rules of kindergarten, such as sharing, being kind to one another, cleaning up after ourselves, etc.

If I had the opportunity to suggest a sequel specifically for lawyers, its title might be All I Really Need to Know about Professionalism I Learned on the Golf Course. As golf stands out from other sports as a “gentleman’s game,” the ideals of professionalism in the practice of law are aimed at ensuring our field remains a “high calling” and not “just a business like any other,” enlisted in the service not only of the clients, but of the public good as well.

The game of golf is governed jointly by the Royal and Ancient Golf Club (R&A) of St. Andrews, Scotland, and the United States Golf Association (USGA). But, as stated in the USGA’s “The Spirit of the Game” document, “Unlike many sports, golf is played, for the most part, without the supervision of a referee or umpire. The game relies on the integrity of the individual to show consideration for other players and to abide by the Rules. All players should conduct themselves in a disciplined manner, demonstrating courtesy and sportsmanship at all times, irrespective of how competitive they may be. This is the spirit of the game of golf.”

END_OF_DOCUMENT_TOKEN_TO_BE_REPLACED

Here is my last weekly update of the 2013 Georgia General Assembly Session for the State Bar of Georgia, which was extremely successful for the State Bar with the passage of the Juvenile Justice Reform bill and the passage of an amendment making legal malpractice claims nonassignable to third parties. I am very proud of the Bar’s Legislative efforts this year, our superb lobbying team, and our new grassroots program. Thank you, also, to all the legislators who gave of their time to represent the citizens of Georgia so selflessly. We appreciate your sacrifice.

Thursday, March 28, marked the last day of the 2013 legislative session, one of the most successful on record for the State Bar of Georgia. This session saw the passage of several major initiatives of the State Bar, highlighted by a comprehensive rewrite of the Juvenile Code.

The passage of Juvenile Justice Code was a major success for the State Bar and most importantly for Georgia’s justice system and for the citizens of our great state. This new approach, focusing away from the old system of youth detention, puts an increased focus on community based programs and counseling with the ultimate goal of returning these troubled youths to our neighborhoods as productive members of society. A major initiate of Gov. Nathan Deal’s Special Council on Criminal Justice Reform, passage of the Juvenile Code was truly a bipartisan effort from the outset and stands to help improve our state for years to come.

END_OF_DOCUMENT_TOKEN_TO_BE_REPLACED 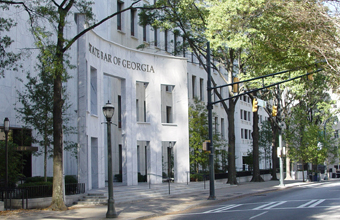 As President of the State Bar of Georgia, I recently had the distinct honor and high privilege of being the keynote speaker for the DeKalb Bar Association’s Annual Bench & Bar Dinner at the Emory Conference Center. This year the DeKalb Bar honored Judge Clarence Seeliger, a trailblazer in Civil Rights in DeKalb County, Georgia, with its Pioneer Award. The honor was well deserved. Below are my remarks from the wonderful event.

END_OF_DOCUMENT_TOKEN_TO_BE_REPLACED

Here is my op/ed piece that is appearing tomorrow in the Savannah Morning News and the Columbus Ledger Enquirer.

END_OF_DOCUMENT_TOKEN_TO_BE_REPLACED

Last night I had the great honor and distinct privilege, as President of the State Bar of Georgia, to recognize Judge Carla Wong McMillian, recently appointed by Governor Nathan Deal, as the first Asian Pacific American state appellate judge in the Southeast. This was an historic appointment by Governor Deal and the State Bar of Georgia salutes him, as well, in breaking this barrier for Asian Pacific Americans. I was proud to stand with the Honorable Al Wong, Judge, State Court of DeKalb County and the very first Asian Pacific American state court judge in Georgia, to recognize this nod to the need for vigilance and diversity.

Judge Wong McMillian’s colleagues from the Georgia Court of Appeals joined us, as did many members of the Georgia Asian Pacific American Bar Association (GAPABA) who co-sponsored the reception. Thank you also to Thomas Worthy, Governor Deal’s Deputy Executive Counsel, for joining us. My remarks from the evening are copied below. It was a wonderful night to celebrate diversity and take pride in the extraordinary appellate bench we have in Georgia. As I said last night, “each time a barrier is removed in the leadership of our courts, a door opens to a new generation of potential judges, which might include the next Thurgood Marshall, the next Sandra Day O’Connor, the next Robert Benham, the next Leah Ward Sears or the next Carla Wong McMillian. And that is something to be celebrated.”

END_OF_DOCUMENT_TOKEN_TO_BE_REPLACED

I am Robin Frazer Clark and am the President of the State Bar of Georgia, which is made up of nearly 44,000 lawyers, including judges, prosecutors, public defenders, private pratitioners and even Legislators. On behalf of the State Bar of Georgia, let me first thank you as members of the Georgia General Assembly for your dedication to the citizens of Georgia and your personal sacrifice I know each of you make to be here and make a difference. We appreciate you.

END_OF_DOCUMENT_TOKEN_TO_BE_REPLACED

Thank you, Susan, for that kind introduction and the very nice invitation of the GAWL to be with you here today. I see some dear friends in the audience today, and it’s always nice to have smiling faces in the audience.